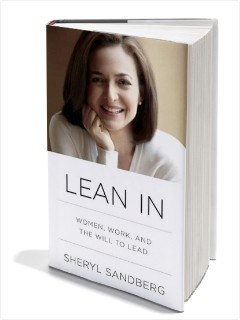 This is meant not as a harsh criticism but rather a gentle reminder to Sheryl Sandberg. I enjoyed Lean In and I agree with, and relate to, a great deal of what Sandberg says.

Sheryl – there are women in the workplace, and at home, who do not have children for one reason or another and we would like a seat at your table.

I almost didn’t read Lean In. When it came out I was finishing up the semester and I read some of the critiques of it. But I must have placed a hold at the public library and my turn on the list came around right as the semester ended so I thought why not? I really enjoyed Lean In (at least until the last couple of chapters). There were parts where I found myself nodding along – women do not negotiate as often as men, and when they do they are perceived more negatively. There were parts were I learned something – the chapter on mentoring – oh boy have I been going about that wrong! I found Chapter 7 interesting – as someone who does not have children it wasn’t relevant to me in a personal way but rather in the way of someone who manages people and works with people (men and women) with children.  The advice in Chapter 8 about making your partner a real partner is good for everyone, even those of us without children can fall into traditional gender roles without partners and that usually means the woman does more domestic tasks.

But she lost me at the end. I was listening to the book but I could sense it was drawing to close and I realized she was dividing women into only two groups –those who are the primary bread winner and those who are the primary care giver. Surely not I thought! Sandberg has gone out of her way to be inclusive in her statements, to point out that her choices are not for everyone, surely she can conceive of women who do not have children at all.  But when she closed with this:

I look toward the world I want for all children— and my own. My greatest hope is that my son and my daughter will be able to choose what to do with their lives without external or internal obstacles slowing them down or making them question their choices. If my son wants to do the important work of raising children full-time, I hope he is respected and supported. And if my daughter wants to work full-time outside her home, I hope she is not just respected and supported, but also liked for her achievements.

I realized she had forgotten all about me, about us. Sandberg repeatedly references the feminist movements and all those who came before have done help women succeed but she seems to have forgotten one huge advance – birth control.  That little modern miracle that allows women to choose when (and if) they have children. There are women (and men) out there who are childless (for many different reasons) and we struggle with many of the same issues Sandberg addresses in her book. Sure we may not have to go to work with morning sickness or worry about time off to be with our children, but we have to deal with the same stereotypes, the same struggles against sexism, the same biases. Not having children does not magically make us men.

Others have written about this issue with the book as well

Kerry Hannon points out on Forbes that

Kate Losse on Dissent points out that:

Astonishingly for a book published in 2013, there are no self-identified lesbians, gay men, or even intentionally unmarried or child-free people in Lean In’s vision of the workplace.

Ann Friedman at The Cut writes

But if a childless employee cops to the fact that she’s ducking out for a yoga class? It’s seen as downright indulgent and may even show up on a performance review.

You get the idea. Like all books (and things) this one isn’t for everyone but I still recommend it. I really enjoyed the book and highly recommend it. I have no doubt that despite her closing paragraph Sandberg will fully support either of her children’s decision to not have children of their own. Women (and men) who are child-free by choice (or other reasons) deserve a seat at the table too and are working with women (and men) to improve women’s place at work and at home.

One thought on “On Lean In – Did Sandberg Forget that Some Women (and Men) are Childless?”