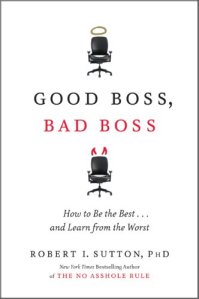 Good Boss, Bad Boss: How to Be the Best… and Learn from the Worst

this should come as no surprise to anyone, I’ve mentioned Robert Sutton’s first book The No Asshole Rule: Building a Civilized Workplace and Surviving One That Isn’t

several times on this blog, including in There is No Excuse for Bullies at Work (or Anywhere Else). As Sutton notes in the opening of Good Boss, Bad Boss:

A 2007 Zogby survey of nearly eight thousand American adults found that, of those abused by workplace bullies (37% of respondents), 72% were bullied by superiors.

I highly recommend both of these books to everyone. Workplace conditions affect everyone, even those who aren’t the victims.

A 2007 Gallup survey of U.S. employees revealed that 24 percent would fire their boss if given the chance. Gallup concludes that crummy bosses are a primary reason that 56 percent of employees are “checked-out” and “sleepwalking through their days.” Worse yet, the most bitter employees (the “actively disengaged” 18 percent) undermine their coworkers’ accomplishments.

For those hard to convince, working conditions also directly affect the bottom line

University of Florida researchers found that employees with abusive bosses were more likely than others to slow down or make errors on purpose (30% vs. 6%), hide from their bosses (27% vs. 4%), not put in maximum effort (33% vs. 9%), and take sick time when they weren’t sick (29% vs. 4%). Abused employees were three times less likely to make suggestions or go out of their way to fix workplace problems. Abusive superiors also drive out employees: over 20 million Americans have left jobs to flee from workplace bullies, most of whom were bosses.

No Shelf Required: E-books in Libraries

by Sue Polanka – very timely given the recent HarperCollins fiasco and Sue being named a Mover & Shaker by Library Journal. Plus I’ll be contributed to the new edition. 🙂

I recently finished World Without End

and Night Over Water

by Ken Follet. I enjoyed World Without End probalby better than The Pillars of the Earth

, Night Over Water was definitely my least favorite of his.

I just started finished The Queen’s Fool. I read The Other Boleyn Girl

several years ago when I was in Europe and enjoyed it. The Queen’s Fool was ok but I definitely liked The Other Boleyn Girl better.  Now I need something new to read. Maybe another Phillipa Gregory title? Recommendations?

What are you reading?