Why Mobile Phones Are Not the Key to the Digital Divide 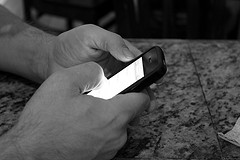 Earlier this week  I tweeted

Which linked to this article from, Pew Internet and American life – Mobile access helps agencies break past digital divide | Interview with Aaron Smith. In which Smith says

“I think mobile is playing a key role in bridging those gaps between people who have that broadband connection at home and people who don’t. It really gives people an economically viable opportunity to tap into the online world that they wouldn’t normally have,”

I got some responses back on Twitter including from Jason Griffey and Tiffini Travis disagreeing with me, Jason suggested dueling blog posts.  Earlier this year I wrote a post entitled Mobile Phones Are Not The Key to Bridging the Digital Divide in response to an NPR story, A Digital Revolution In The Palm Of Your Hand.   Since this is actually my second attempt at addressing this issue on my blog I hope I am more elegant, articulate and successful in delivering my message.

Reports and studies show that  minorities and lower-income households rely on mobile access because they do not have access at home.

Other cultural forces aside, minorities, lower-income households and younger adults access the Internet at higher rates on mobile devices because they often do not have computers at home. – NYT, 2010

According to the FCC’s National Broadband Plan

Like electricity a century ago, broadband is a foundation for economic growth, job creation, global competitiveness and a better way of life. It is enabling entire new industries and unlocking vast new possibilities for existing ones. It is changing how we educate children, deliver health care, manage energy, ensure public safety, engage government, and access, organize and disseminate knowledge.

I agree with Jason, mobile technology is improving at a rapid pace.  However, it is not on par with a computer with a high-speed internet connection.  There are many things you still can not do with a mobile phone, even a smart phone.  Are we really willing to say that this less robust point of access is acceptable for minorities and the economically challenged?

As I said before:

I firmly believe that this will result in the sort of second class citizens that the Knight Commission warns us about. Please don’t make me point out the problem of accepting a sub-standard option for minorities.

We must acknowledge that, while mobile access is better than no access, it is still not the equivalent of high-speed access from a computer. It is not acceptable for privileged, economically sound, techno savvy people to state that these two forms of access are the same. When you look at the reasons for the National Broadband Plan:

How is a separate and inferior point of access acceptable for a different socio-economic group of people?